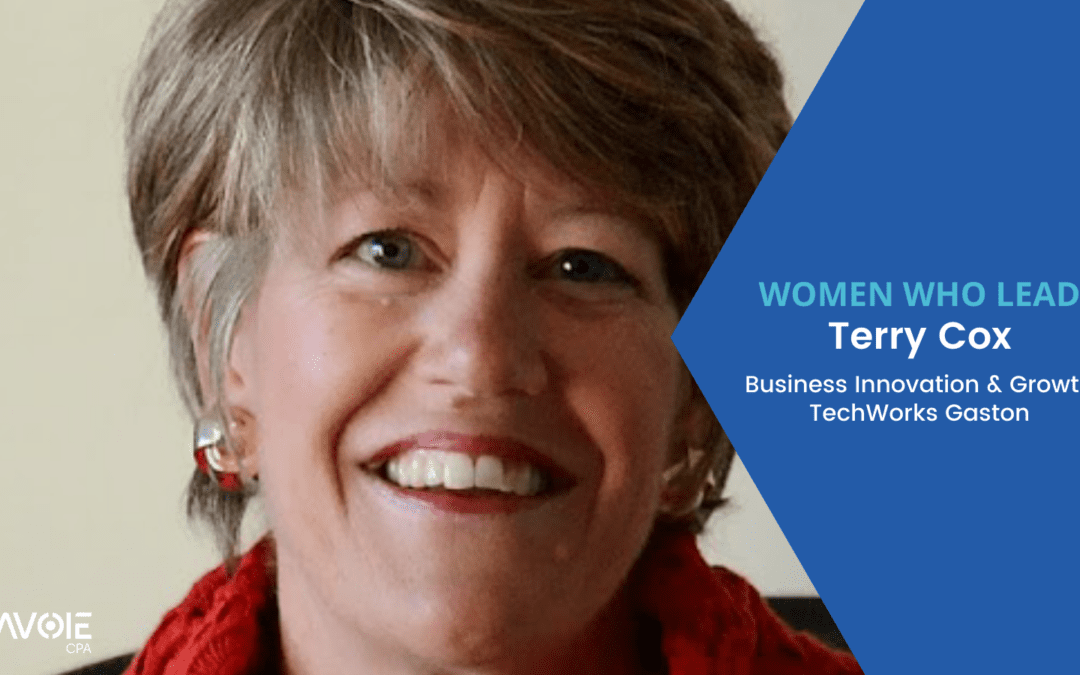 Charlotte is an entrepreneurial haven — a thriving metropolis where growth-oriented companies can put down roots and flourish. But the Queen City wasn’t always so hospitable towards business owners.

In 2003, when Terry Cox moved from San Francisco to Charlotte, she noticed a dearth of entrepreneurial culture. “There was no ecosystem or connectivity,” says Cox. “Entrepreneurs were out there swimming upstream alone.”

Two years later, Cox founded Business Innovation & Growth (BIG), a membership organization that fosters a peer-to-peer network of like-minded companies. Through offering mentoring for early-stage entrepreneurs, access to resources and capital, and best practices for high-growth enterprises, BIG has emerged as a daily staple in Charlotte’s business scene. Cox also serves as the Executive Director at TechWorks Gaston, a learning center design to create economic opportunity for businesses and residents in Gaston County.

We spoke with Cox — the unofficial matriarch of the city’s entrepreneurial movement — to learn more about what it takes to be a woman in business.

You’ve accomplished a lot in your career: You worked as a CPA. You ran a wholesale and retail ice cream business in Georgia. You took over the helm at the Metrolina Entrepreneurial Council. With all of that experience under your belt, what motivated you to found BIG?

When I moved to Charlotte from San Francisco, I was searching for high growth entrepreneurs and when I talked to each person, I realized no one knew one another. I was like, “This is crazy.” I came from San Francisco where there’s such an ecosystem of entrepreneurship in the Silicon Valley. In Charlotte, there was a huge void that needed to be filled.

What were the challenges of founding a peer-to-peer network in the Queen City?

Most venture capital firms have never seen enough deal flow come out of Charlotte to warrant having an office here, much less even spending a day in Charlotte. They just fly right through Charlotte and on to Raleigh. They don’t even stop to see what companies are here.

That’s slowly changing. We are now on the radar of investors because we got very intentional about building out the entrepreneurial ecosystem. In 2006, I realized we needed to build a critical mass of entrepreneurs and then seek capital. But you’ve got to find entrepreneurs who are willing to take that bet with you. You have to have a compelling value proposition for them to do something they haven’t seen before.

Were there any other personal or professional challenges rooted in moving to the East Coast?

The biggest challenge for me was the culture. Charlotte has a very conservative culture whereas San Francisco does not. San Francisco is very much about taking risks. It’s a different mindset but you’ve got to listen, observe, alter your behavior and strategy accordingly.

For example, when I moved from San Francisco to Charlotte, I appeared pretty aggressive for the first year. I was aggressive in terms of my thinking. I was just like, “Let’s go. Let’s just get on with it.” I had to learn how to slow down and meet others where they are.

Funny enough, in the early nineties, I moved from Savannah, Georgia, to San Francisco and that was a huge culture shock for me. Holy cow. I spent so much time trying to get rid of my southern accent. I would replay a voicemail message over and over and over before I hit “send.” They thought southern bells were dumb gals.

You make an interesting point about cultural differences. In your experience, how do San Francisco and Charlotte compare in terms of attitudes towards women in business?

When I went out to California in 1993, the firms I worked with were much more open-minded about promoting and encouraging women. They were also definitely more accepting of LGBTQ+ individuals and other minorities. It was just a melting pot out there.

We’re probably ten years behind that in Charlotte. It’s just shocking to me that women still have a tougher road here. It’s unconscious bias. A lot of men don’t even realize how they think of women, perceive women, and treat women. It’s just ingrained in them. It’ll take a long time to reverse this but I think we’ve made some headway.

For instance, I’m thrilled by how many more female startups I’m seeing. Female and minority-owned startups are finally getting capital, even though historically that’s been hard for them. We’re finally getting somewhere. There’s truly a strong women’s movement happening and I hope it continues.

What is your professional personality style?

I am who I am. I’ve never tried to be anything different. For instance, I can’t be political. I just can’t play politics, especially corporate politics. I’m just not a politically-minded person.

I always take the high road. I believe very much in integrity and honesty and transparency. I’m always considering my reputation and brand because, at the end of the day, that’s all I have. When I put my head on my pillow at night, I have to own what I did that day. I’ve got to feel good about it. If I was being told to do something that wasn’t ethical, I would walk out the door before I’d stay for the paycheck.

All that being said, I don’t work for the money. I work to drive impact and change.

You work to drive impact and change. Can you provide an example of when you did just that?

Though they had never seen this concept before, it hit home when I told one of the county commissioners, “Your grandkids are not coming back to this county. We need to start to create an ecosystem that creates and supports jobs for the future of Gaston County.”

Earlier you noted that you never work for the money. Has that always been your philosophy?

Years ago, I ran my own business in Savannah, Georgia, and was one of maybe three female business owners in the whole city. I struggled. It was hard. So when I left that behind, it was nice to just be making good money. That’s when, like many other people, I became a victim of money. I started staying at jobs, not because I was happy, but because of the money.

I got stuck on that career track. I was working all the time, making decent money, and enjoying that money. But when my mother came to visit me one time, she said, “You’ve become a person I no longer know.” I was like, “Wow.” It hit me right between the eyes.

I had become very aggressive. I was in a highly competitive culture — a firm of Type A people — and to survive I had to be like that. But when my mother made her comment, I left the whole game and chose to travel the world for a few years. Now, I’ve come back to the business world with a different approach. I’m driven by purpose, not money.

I won’t lie — sometimes I still get frustrated because I don’t make the money I used to make. But I’ve developed a huge, meaningful network and great relationships. And that’s what makes me happy day in and day out — relationships.

Throughout your career, have there been any widespread changes in how women are received in the business world?

Women are starting to be heard. People are starting to realize what women can get done. They may not approach business like a man would but they can accomplish great things in their own way. Compared to the 1980s when I worked as a CPA, women now can just be themselves. Women can be their own identity. They don’t have to try to act like a male just to be accepted in the corporate world.