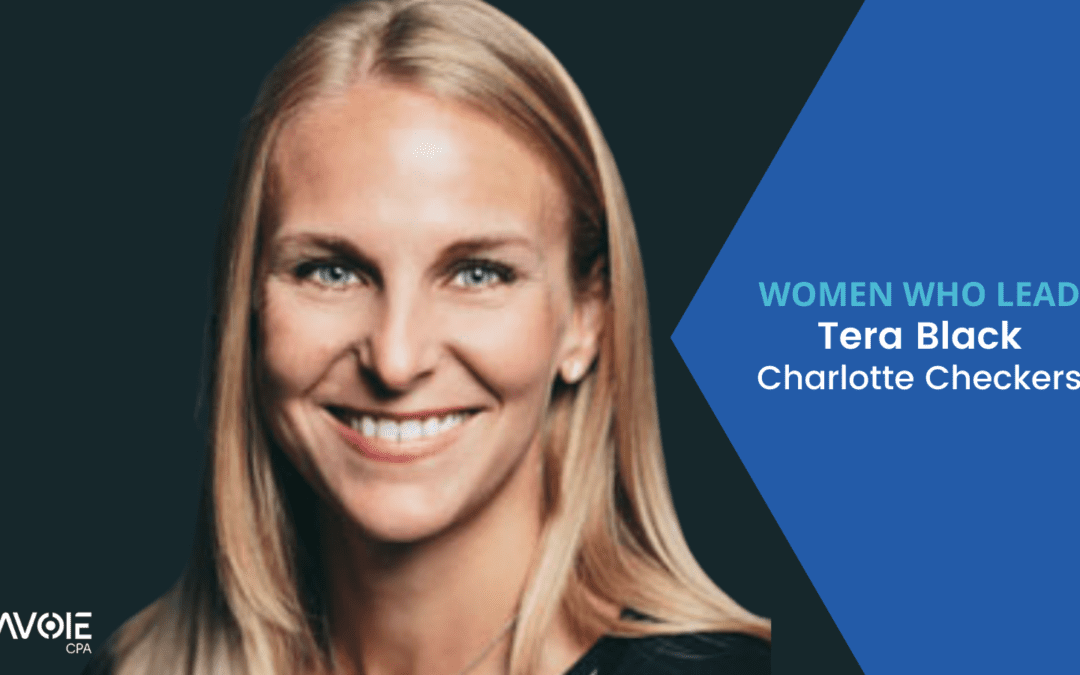 Tera Black sells fun for a living and has for the past 15 years.

She doesn’t own a toy shop nor does she dress up as a birthday clown. Rather, Black is the Chief Operating Officer of the Charlotte Checkers, a minor-league professional ice hockey team based in the Queen City.

After all, the rink is one of few places where kids and adults can bang on the glass and “use their outside voices for three hours straight,” says Black. In her opinion, the rink is also a place where women in the sports industry can fight for diversity and inclusion.

We sat down with Black to hear more about her life on the ice.

In 2016, you won the James C. Hendy Memorial Award for being the American Hockey League’s most outstanding executive. Months later, you received the Game Changer award from Sports Business Journal. Then, in 2017, you were named a Women in Business honoree by the Charlotte Business Journal. Considering all of this recognition, what accomplishment in your professional career are you most proud of?

That’s an easy question. Awards are wonderful but they don’t happen alone. I think something I do really well is surround myself with great people. For my entire career, I’ve had the privilege to build wonderful relationships. That’s what I’m most proud of. Every single one of my staff members is better at what they do than I could ever be. They work so hard and are such leaders in their respective fields. Make no mistake, any award I get is simply by putting all my team in the same room together and watching them shine.

You’ve been with the Charlotte Checkers for more than 15 years now. Have you stayed because of those relationships?

Yes. In sports, you’re typically in a place for five-ish years and then you move along to the next team or the next position. That’s the way the resume grows. But the ownership of the Charlotte Checkers is second to none and has provided me the opportunity to do great things in this great city of Charlotte. They’ve allowed me to do things differently.

At the AHL level, we have the autonomy to be really creative. We can embark on a lot of philanthropic and charitable ventures. The player access is very liberal. They’re working hard at becoming good, solid members of the community while also becoming great athletes. They are building their community resume as much as they are their professional hockey resume.

So there are lots of reasons why I’ve stayed with Charlotte Checkers — the ownership, the people, the city, the athletes and most importantly the front office team that we have assembled here. .

You mentioned that the ownership of the Charlotte Checkers has allowed you to “do things differently.” Can you provide an example of how you have gone against the grain?

We work hard to recognize that every season is different and that what was successful one year, might not be the next. We rely on our employees to bring the great ideas to the table that will translate to successful opportunities to sell the sport that we love so much. In my opinion the game will sell itself, but getting people to try it the first time is up to us. The ownership has done a great job of giving us the autonomy to try new and different things in our market. Several years back we had a midnight game for example. The owner, (Michael Kahn) also is not a micromanager, so he’s open to unique ways of creating entertainment and just lets us do our things. We also had a flex work schedule long before Covid introduced the concept that people can truly be productive while not being glued to their office chairs. In this industry, the schedule can be grueling, so we really try and recognize that our people need the time to refresh.

How would you describe your leadership style?

I am not a micromanager. Each of my senior staff members runs their department like their own small business — they’re accountable for everything that happens within their department. I find that having each leader to make those decisions, rather than getting me to approve literally everything in the organization, works 99 percent of the time. When it doesn’t and a mistake is made, we all learn from that.

I try to create an environment of trust. If they want to work from the moon, they can work from the moon. I know that they’ll get their jobs done. I love that because each department has a different approach. I don’t say, “Here are the guidelines.” They do it their own way. Out of that comes a really nice compilation of people and strategies that sometimes crossover.

For instance, our whole staff is involved in planning the entire season. When you have 36 home games, it’s like planning 36 weddings. That being said, every single person is included in that process and has the opportunity to bring ideas to the table and see them through.

Are there any challenges that come with offering your staff so much flexibility?

There’s a lot of responsibility on me and our senior staff to hire the right people who can work in that type of environment. There’s nothing wrong with it, but some people are very structured and need a certain set of guidelines and rules. I’m more fluid in my approach to leadership and try to understand how each person likes to be managed rather than applying a blanket approach across the whole organization. Everyone is motivated differently.

On an unrelated note, you’re a registered member of the Cherokee Nation, correct?

Yes. So there’s the North Carolina Band of Cherokee Indians and then there’s the Oklahoma Band. I am a member of the latter. My ancestors were full-blooded Cherokee Indians but clearly I’m not. My mother has Swedish heritage so that’s where the blonde hair and blue eyes come from.

I spent a lot of time in Oklahoma with my grandparents growing up learning about and absorbing the culture of the Cherokee Nation. It’s opened up a lot of perspective on where this country has come from and where it’s going. It’s a privilege to be connected to such an important part of our country’s history. I still have so much to learn.

Do you think that experience colors your filter of the world around you, specifically the business world?

For sure. That part of my personal history changes my perspective but so does the fact that I’m a female in a very male-dominated industry. I’m the only woman on the Board of Governors in my position. So when we’re talking about things as a league, it’s typically coming from the male perspective. It’s been a really awesome opportunity for me to suggest changes that otherwise would  have been seen through a predominantly male filter. My colleagues in this industry, specifically in the AHL have been so supportive of me in my career. I’m very lucky that way.

The same goes for having a Native American history. It’s just another unique perspective that lends itself to being very open-minded to how we can shape our sport to serve a much bigger population.

What’s something in the sport that you would personally like to see changed?

Hockey is very focused on improving the diversity of our game. You’ll notice that hockey attracts a population that has grown up in traditionally non-diverse areas so exposing the sport to different cultures is something that the NHL and AHL are both working very hard on.

Hockey is a relatively expensive sport to participate in. Just take Charlotte, for example. We have three and a half total sheets of ice in the marketplace. When you want to play, you have to rent the ice and typically it’s in the $350 an hour range. Then you’ve got the skates and all the protective wear. It’s all expensive. There are a lot of programs developing to help people get involved in the sport whether that be street hockey or roller hockey or intro to hockey for really young kids. The First Goal program is one of those and it costs just $250 and includes a full set of gear, 6 lessons and two tickets to a Checkers game for kids ages 5-9.

On a related note, I would also say that there are relatively few females in executive roles in professional hockey.  It’s not an easy industry to be in, especially during your childbearing years, because of the time that’s required. I went through this myself. I had two kids during the hardest part of my career.

If we want to populate our industry with great women who are talented, we have to be aware of the fact that females need the latitude to have flexible schedules in the years that they are growing their families. Flexibility gives women the opportunity to be great mothers, great spouses, and great executives.

What’re some other examples of how you’ve changed your company’s culture to accommodate mothers?

I’m taking this approach with both men and women because they share the responsibility of parenting and it is very important to me to support them through the years they are growing their families. It is also very helpful in helping me retain their talent. For example, one of our male executives has three young kids and another has two. They never asked about paternity leave because they didn’t have to. I have told them from the very beginning, “You are extraordinarily important to this team and this is a really important time in your life. Time is a currency you cannot earn more of, especially when it comes to raising your kids. So do what you need to do to be good at both.”

That’s wonderful. Speaking of talent retention, you have been with the Charlotte Checkers since 2006. How do you stay engaged after having been with the same company for so long?

My philosophy is this: Life is the pursuit of happiness created by a collection of experiences.. And I have enough, right where I am. I am very, very happy.  I’m in a unique industry. We can be very creative with how we design our games and our entertainment opportunities. Every year is different. We’re always thinking about different ways we can use sports to not only give people a break from reality, but also to unite people. It has been a remarkable career for me thus far.

Of course, it’s up to me to not become stagnant. It’s not up to my employer to keep me happy and motivated. It’s up to me. And I have enough — I love it here.

That’s such a nice reminder that job satisfaction doesn’t always translate into dollars.

Definitely. I have a quote on my wall from Marlene Dietrich and it says, “Earning a great deal of money does not necessarily make you rich.” You need to make money — that’s how this world works. But filling your life and your environment with all of the other things that bring you joy makes that monetary quest far less important.

What’s a new skill you are learning right now?

My husband is teaching me how to play chess. I’m at that age now. I’m starting to worry about brain health and my mom has Alzheimer’s. Chess is just helping my gray matter to be a little bit less rigid. It requires so much dynamic thinking. There are so many things happening on the board while you play. It’s like a microcosm of life.