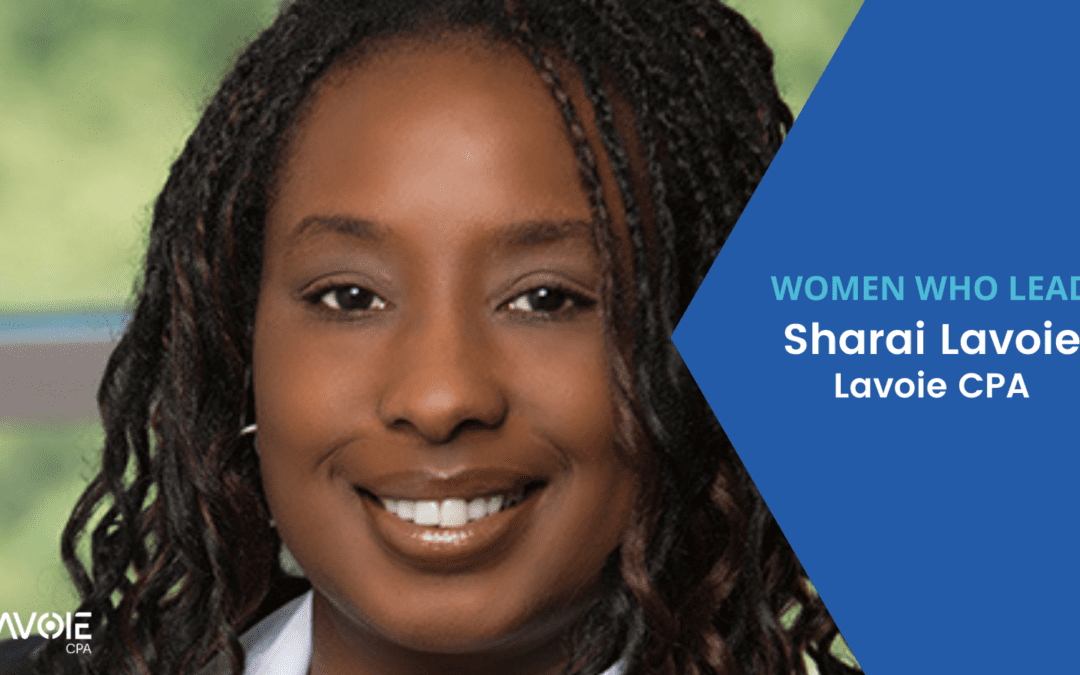 Although Sharai Lavoie doesn’t like talking about herself, there certainly is a lot to keep the conversation going.

Lavoie is the founder and CEO of Lavoie CPA, a professional services and technology firm that provides strategic advice to its roster of clients. Since starting her own company in 2009, Lavoie was awarded the Woman in Business award in 2017 by the Charlotte Business Journal.

“I never wanted [my business] to be a typical partner structure,” Lavoie says. “The passion in what we do is around knowing that you’re making a difference in the company that you’re working with.”

We sat down with Lavoie, who graciously answered a few questions about her experience in business and finance.

What were you able to do as the founder of your own company that you couldn’t working for someone else?

When you’re working for someone else, you can see that something needs to be done but you don’t necessarily have the power to act upon it, making it happen. In having your own business, if I see that, okay, I think we’re going down the right path or we need to go in a different direction, I don’t have anybody to argue with about it other than myself. And what does that mean for the employees and planning for that side of things, versus, you know, having to convince somebody that we really need to be going in this direction or we really need to pay more attention to this part of what’s going on in the world. I don’t have to convince somebody of that.

Because you don’t have to convince anyone, are you able to do your job better? Are you able to maximize your skills in the ways they’re meant to be maximized?

Some days. Some days I am; some days I’m not. It’s just because we are a smaller company, so I do have to wear a lot of hats. But as we grow, I do get to say “This is where I’m best suited, so I’m going to focus my time here and I’m going to backfill for anything that I may be doing that I’m not suited for.” And so from that perspective, yes.

Tell us about the process of opening your own business.

[Opening my own business] is just something I’ve always wanted to do. I was working on it at the place that I’d left to start my own business. I was kind of doing what I’m doing now on a much smaller scale and the owner, he gave me the confidence to do it if I wanted to do it. He saw in me what I knew I had in myself. He saw it and he acknowledged it. I wasn’t like “Oh, in two years, I’m going to [start a firm] and that’s what’s gonna happen.” It was just kind of one of those things. I know I can do it, I just need to figure out how to make it happen and do it. And he was like “Yeah, go for it,” and that’s what I did.

You sound so cool, calm and collected when talking about the experience.

In those scary moments, what did you do to keep moving forward?

Honestly, I would just pray and say “Look, you’ve gotten this far. You can just keep going.”

You can believe in yourself, but you doubt yourself every step of the way. There was no book that I read [on how to start a firm] or any of that. It was just “I’m gonna do this. If this messes up, there are other things that I know I can do because I’ve gotten this experience to do this.” I just would pray about it and say “Okay. Get over yourself and get going.”

Why is advancing women in business important to you?

From the woman’s perspective, you know, you spend so much time with people, so to speak, putting you in your place: “This is your place; those are your boundaries.” And I love to see women take up roles in a man’s space because it says “Screw you; you missed out.” That’s the part about women in business that I love.

When you spend time hearing people tell you can’t do things because that’s not what women are supposed to do, or this is as far as you’ll probably get, or you’ll probably drop out of the workforce and have kids — and if you do that, that’s great, that’s your decision. I mean, a year into starting the business I found out that I was pregnant. I could have easily said, “Well, no one’s gonna want to work for me. After they see I’m pregnant, they’re gonna be like, ‘Well is she really going to be around or serious about this?’” But luckily, we had great clients and they got it.

So for me, I guess it’s more of, [as a woman] you’ve kind of been looked over for so long. And there are so many women doing so many things that they fly under the radar, why not celebrate them?

What barriers existed at the start of your career that have since changed?

One thing I experienced, not directly from my bosses but inadvertently—and over time I have seen it change—is being viewed as more of a helper versus someone that could lead. You’re viewed as more of an assistant, like, “You can help me with some of these projects but don’t think you’re going to present anything.” So it’s more of that. But I think over time it’s been more of, “Oh, she can take that and run with it and lead with it.”

What do you hope the future of finance looks like?

I hope that the future is more diverse. And I think that the future of accounting and finance is going to be a different landscape where the people that are in it are there more for the strategic side of things. Because I think a lot of things will end up being automated. And so I’m hoping that it will be more diverse in the sense that people aren’t just looking at you as these are the few things that you do, they realize that it’s a much broader scope.

You may have been in positions where you were the only woman, so there were no senior women to mentor you. Now that you’re in this executive position, how do you feel about mentoring others?

I actually mentor with Innovate Charlotte. I’ll do it in a heartbeat. If you have something that you can tell someone or a resource you can provide to them, you should. It shouldn’t feel like a space where you feel like “Oh I can’t tell this person this because of XYZ.”

If you don’t ask, you don’t get, and if you don’t speak about it you don’t learn. Nobody can read your mind. You have to be willing to pay it forward. And I guess for me, with mentoring and trying to mentor, it’s more about paying forward. Helping someone else so that maybe they don’t have to have as hard of a road as I have had.

What are you most proud of?

I think I’m probably most proud of the fact that I made it this far as a mom and my son still thinks I’m cool. It just gives me the courage to do this.

Because [my son] gets to see that a woman in this position is how it’s supposed to be. He thinks I can do anything.