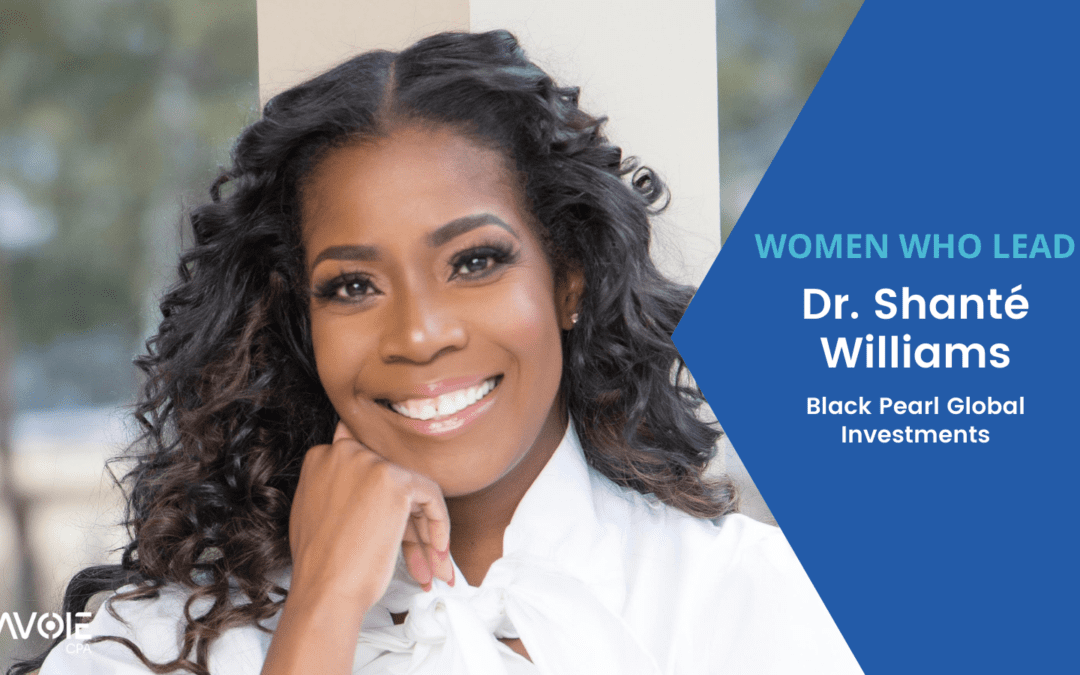 When Dr. Shanté Williams was moving through the corporate landscape, she says people probably thought she was a bit of a flake. She would come into position, do really well, get a little promotion, and then ask, “Okay, now what’s next?”

“People were like, ‘Do you just not have the capacity to stick around?’” says Williams. “I used to take that to heart and then I’d feel bad about moving.” But not bad enough to stop. Instead, Williams continued to explore projects that made a difference, regardless if they were in totally new industries.

“If you choose yourself, if you choose to cultivate the things that make you happy and that you’re really good at, you can go anywhere,” says Willaims. “You don’t have to be limited by what other people think you’re good at.”

We talked more with Dr. Williams, CEO and founder of Black Pearl Global Investments, about her career moves and her self-titled role as a capital activist.

After reading about your career, it’s very hard to pigeonhole you into any one industry. You started with a Ph.D. in biomedical science. Then you worked in business, healthcare, finance, and now you own and run an investment firm. It can be hard for some people to change careers. How did you work through that?

I’m glad that you weren’t able to pin me down to one industry. That’s intentional at this point. It was not intentional when I started.

When starting out in your career journey, you absolutely [pigeonhole yourself], right? And for me, I kept saying “Okay, this is who I am” and then I would quickly hit a ceiling. Changing jobs within the same company, or even expanding your duties [at the same company] can become very very difficult if you learn very quickly. So for me, I just kept hitting that ceiling.

Then I started saying, “Okay, so maybe I’m not just one thing.” I continued to find job activities and boards that allowed me to pull on more than one lever.

In business school, they say “You have several tools in your toolbox, which one are you using?” I decided I wanted to be a Swiss army knife and use all the tools and apply thinking and execution to various industries.

It didn’t start off intentionally, but now it very much is. I’m really focused on impact. How can my skills, talents, or whatever I’m doing make the most impact? That’s how I decide what new projects I’m going to take on or what new industries I’m going to get involved in.

Moving to new industries takes a lot of courage and self-awareness. You have to trust yourself and your strengths. Did you always possess this self-awareness or did you have mentors to help lead you there?

I think all of the above. Since I was 16 years old I’ve had what I call “life Sherpas;” people that have guided me to the next step. They would say “You know you can be anything.” I know we say that to everybody, but really having people that meant it [when they said it to me].

When I was in high school, I was the kid that didn’t necessarily try very hard. I ended up getting all the answers right in a chemistry lab. My chemistry teacher wrote me a note on a little Post-It — I still have it — and it says “I’m giving you a C, not because you didn’t get all the answers right, but because you didn’t try. If you want to achieve anything, it’s gonna take blood, sweat, and tears, and knowing who you are.”

And at the time, I thought this was the world’s most unfair thing. Looking back, I recognize that I was very self-confident almost to a point where it was probably a little bit annoying and maybe a little arrogant. What [my teacher] was trying to do was encourage my confidence but also say “You’ve got to couple that confidence with real substance and effort.”

I feel like I am very confident, but it’s because I push myself out of my comfort zone, whether it’s industry, application, or scale. I’m bringing me to the table.

And I think that that’s kind of the secret behind a lot of successful women and business leaders. Favoring themselves. They know who they are. They know what they bring to the table. They show up as themselves and not as a version of a CEO that someone else thinks they should be.

Sometimes you don’t hit the ball out of the park on a new journey or a new adventure, but you absolutely swung for the fences. I’m not scared of failure anymore. I ask, “Was my best effort there?” If I can answer yes every single time, then I can be very confident in moving to the next thing or staying where I am.

Tell me more about this capital activist role you see for yourself.

For me, capital activism is making sure that I am able to give capital, money, and resources to the places and people that need them and that can create the most impact. It doesn’t matter where the capital is coming from. It’s really about me being able to connect all the pieces and get something funded.

Listening to you talk about capital activism, I’m reminded that you’ve published a few books, including Black Angels Among Us. Are your books an extension of your capital activist role?

I get a lot of questions about how I got started, who I invest in, or how I invest. So I started taking all those questions and compiling them. The goal of the book Black Angels Among Us was to share the information and experiences that I’ve had, but make it really easy and really digestible for other people

I think we need more women investing. We need people of color investing. We really need to equip everybody that we can with knowledge so that they can go out and be their own form of capital activists.

One of the most humbling book reviews that I’ve ever gotten was someone who said, “Wow, I feel like I can be an angel investor now.” Because, that was the point — to inspire other people to really think about how they can make an impact with whatever funds they have.

In the book, I talk about not being a millionaire and how my first investment was $1,000. That $1,000 went into a small business so [the owner] could buy inventory, and that helped her get ahead.

You talk about the importance of getting more women and people of color investors. What do we need to do or keep doing to make that happen?

Women investors and people of color that want to be investors, both have two very different hurdles.

A lot of times women investors tend to not feel like they have enough information to move forward or to consider themselves investors, even if they are really well skilled and well versed in finance or banking. I think for women it’s about taking the leap. Investments are risky, which means they’re not all going to succeed. But for women, it’s really just about getting in the game

For people of color, the first barrier really is building up that reserve to be able to invest. That could mean starting your own business, building your wealth, or moving more towards becoming an accredited investor.

But then after that, once you get to the capital reserves in order to be able to invest, it’s helping people of color fund projects or founders that look like them.

So for me, being a capital activist is encouraging women to get off the sidelines and then making sure people of color have the funds, resources, and deployment of capital to build their own dreams.

You’ve been recognized by a lot of different organizations, but what are you most proud of?

When I was just starting out as an entrepreneur, the Charlotte Regional Business Alliance (formerly the Charlotte Chamber of Commerce) awarded me the 2017 Charlotte Chamber Young Professional Entrepreneur Award. And that meant a lot to me because that came right at a time when I had left a very solid, well-paying, corner office corporate position to start my own company.

I had been working for myself for about three years, and that recognition was like little breadcrumbs to say “Keep going. You’re doing something that’s impactful. Keep moving forward.”

I keep that trophy in my home office now and it just reminds me to start somewhere and that there are people watching, and people that are encouraging you to keep pushing forward.

What advice would you give your younger self?

I think the advice I would have given to my younger self is: Don’t be so tied to other people’s opinions of where you should be.

Honestly, I think a lot of the career advice we hear from people is “Drill down, become an expert, and focus on that.” I would say, be open and explore. Work to identify your talent versus a career field. I think if I had done that, I may have taken a similar route but I may have arrived at the thing that drives me sooner.

This year, I decided that I wanted to change my own title from venture capitalist to capital activist.  And that’s not a thing. I couldn’t find anybody that was using that title. It’s not a profession.

I envision myself as someone who can pull the levers of finance, no matter what type of finance — venture capital, private equity lending, angel investing, private investing.

So I’m learning about all of these other areas of finance, all the other sectors of the economy, that I can apply to business growth, to startup growth, to maybe one day launching my own venture again and becoming a FinTech founder. I’m learning about all the other nuances and issues of finance, banking, the economy. It’s really challenging me to think about what I do every day in a different way.