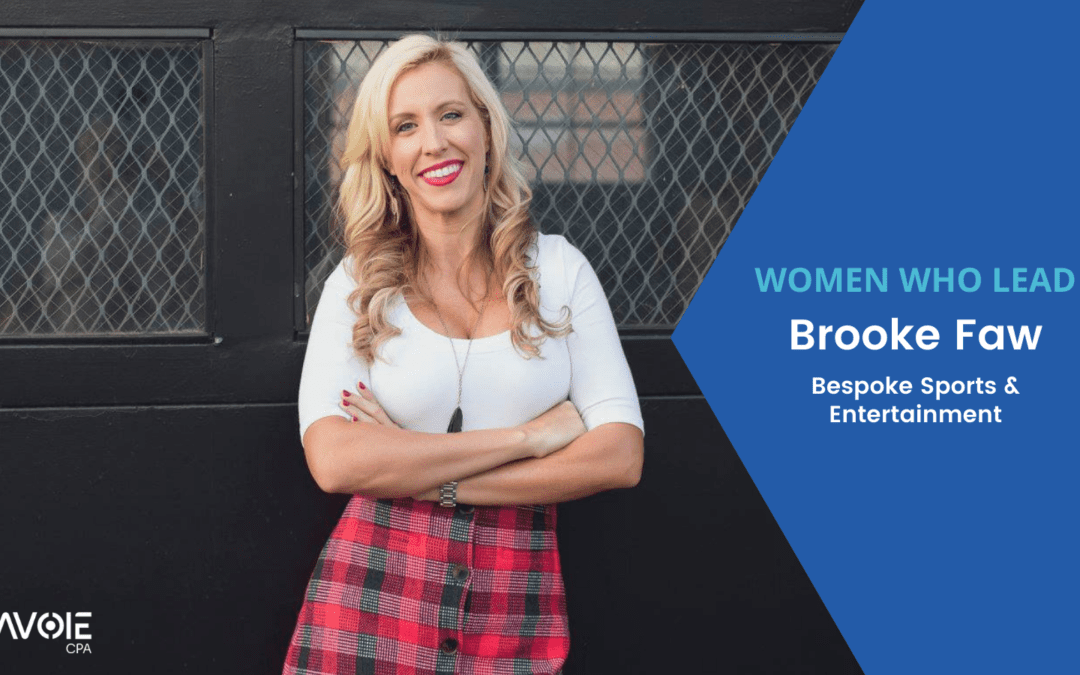 Eight years ago, Brooke Faw posted a picture of Mary Tyler Moore on her Facebook page. In the caption, she talked about how she knew she was going to make it after all. Earlier that day, Brooke met Mike Boykin (her current boss) at an event. (Boykin was running a different agency at the time.) “I said to him, ‘One of these days I’m going to work for you.’”

One year later, TimeHop resurfaced Faw’s Mary Tyler Moore post. It was the same day that Faw called Boykin to accept the offer and work for Bespoke Sports & Entertainment.

“I am a very emotional person so I started crying,” says Faw. “I called Mike and I’m babbling about Mary Tyler Moore, and he’s like ‘Did she die? I’m very confused.’ And I’m like, ‘No! Mary Tyler Moore! I’m coming to work for you!’”

After joining Bespoke Sports & Entertainment, Faw transitioned from manager to director to her current role as vice president. We spoke with Faw about her decision to join an up-and-coming agency and her experience working in sports.

You started your career as a kindergarten teacher and a high school basketball coach, is that correct?

And now you’re the Vice President of Client Experiences. When I look at how you got from point A to today — from teaching to working for a nonprofit to working for a hospital —it seems like you’ve always had a passion for community.

You know it’s funny, I’ve never put it that way but that’s actually the perfect way to put it.

Yes, I’ve always had a passion for helping in any way that I can. Obviously being a kindergarten teacher, there’s a lot of that that goes into it. Then, I was a director of a nonprofit for Earth Fare and we did a ton in helping people live healthier lifestyles. Later I moved over to running sports partnerships for a hospital system in which one of the best things was bringing athletes to our Children’s Hospital.

Now, on the agency side, I love the fact that I can work on multiple projects, and everyone always kind of rolls their eyes when we’re in brainstorms because I’m like, “Okay, and what’s the charity component of this?” Everyone’s like, “Here comes the community relations girl.”

But you know, every brainstorm and every client that I work on, we do something that gives back or helps people or sends a message that just makes this world a better place. Because, why else work if you’re not trying to work towards that?

Is it fair to say that you’ve also always been in love with sports throughout your career?

So, I will tell you a personal story that hopefully the women reading this can learn from. Learn from my mistakes!

When I went to college, I wanted to be an ESPN reporter. I love sports. I love to talk. Put them together and it’s perfect. That’s what I was going to do, that was my dream.

At the time I was engaged — yes, engaged at 19, don’t judge me — I was engaged to a guy who just really wanted the white picket fence and the yard full of kids. When you grow up in a place like I grew up in, in Indiana, I was like, “Absolutely.” So I changed my major to teaching.

We subsequently got married and tried for several years to have children, but I was told that I was never going to be able to have a child. And so we separated.

So here I was at 24, divorced and having this quarter-life crisis. And I just decided right then and there that I wanted to do something in sports. I wanted to pursue that goal. The 18-year-old in me wanted to do it, but that girl listened to a boy instead of actually doing what I wanted to do. This girl was going to do it differently!

I moved to North Carolina and found a teaching job. I taught a lot of kids who had parents who worked in NASCAR. And so I started learning about the roles and responsibilities and different things that NASCAR does and started volunteering for drivers and their foundations and just fell in love with that world.

So I met some who introduced me to some folks at Earth Fare, which is how the Community Relations and nonprofit world started for me. That job moved to Asheville. Ironically enough, I’d gotten remarried and had my son and didn’t want to move him to Asheville.

I took some time off and thought I was gonna be a stay-at-home mom for a minute. That lasted all of about six weeks because that job is the hardest job in the world.

And so I decided to get back into sports. I loved my community relations nonprofit job but I really wanted something in sports to kind of show everyone that I could do it, you know?

So when that sports position became open at the hospital, I was lucky enough to have a lot of people put their names out for me and say “Hey, you really need to talk to this girl.”

When you joined Bespoke Sports & Entertainment, it was an up-and-coming agency. It can be risky joining a small business that’s just starting out, so how did you make the decision to take a leap of faith?

So, yes, you’re completely correct in that leaving a huge corporation that I loved to go work for two men who basically were footing the build themselves to start up this agency was a very risky picture.

However, if you knew those two men, and if you knew what kind of men they were and the reputation they had in the sports world, the number of people that were ready to do anything to help them because they had helped others, you knew that it was a risk but it was an educated risk.

I knew even if the agency failed, they would do everything in their power to get me in a position that I would have never even dreamed of because they were so grateful for me coming over and being a part of their team. If I hitched my wagon to theirs, no matter what happened with the agency, it was going to be a good experience.

So I guess the answer to your question is, I look at the people. The type of person that you work for is so important. If I worked for someone who didn’t have morals or ethics, someone who would undercut people just to make a buck, I wouldn’t be able to live with myself. That’s just a personal decision for me. But the fact that I knew that these men were just solid gold, I was like, “I have to go learn from them.”

I’m interested in hearing a little bit about being a woman in the sports industry. Women and sports have a complicated history, and I’m sure that plays out in your world too. Are there any barriers that you know are different for women in your industry?

Forgive me because I’ll probably cry talking about this, but it is something that I am so passionate about.

I was at a meeting out of town and I had a picture of my son on my desktop. I opened my computer to give the presentation, and people were like “Oh my gosh, your son is so cute! Who’s taking care of him if you’re here?” I can guarantee you that had I been a man, not one person would have asked me “Who’s taking care of your son while you’re giving a business presentation?”

So the societal thought that when women have kids they must be at home with them is killing women in sports. There are very few women over the age of 40 in sports. There are a ton of women in their twenties. But as they start talking about having families, they drop like flies to the point where I came into the sports industry at 25 and was looking for that late 30’s woman to be that mentor to look up to and ask, “Okay, how did you do it all?” And there really wasn’t one. And I searched. Hard.

I asked my bosses, “Find me a woman mentor who is married, who has children, and is still able to be a boss in the sports world.” They found women who were single or who were married without kids. But they could not find anyone that was all those things and still worked in sports effectively.

And so seven years ago, I set out and said “I am going to be that woman.” That is my path, that is my calling.

Another barrier that women have is the crap we have to put up with just to do our job.

I like hearing how you set out to become the role model that you didn’t have but wished you did.

I think our biggest issue as women is when there’s a spot at the top, in my opinion, a woman feels like if she brings any other women up with her she’s gonna lose her spot because there’s only one.

I really think my generation, hopefully, will be that generation that finally says, “No, we don’t want to be the only woman in the room. We want diversity of thought.”

The general consumer is a woman. That’s who people want to market to. Every company wants the female perspective, but their problem is they go ask a roomful of men for it. And so we need more women, especially in the marketing world and especially in the sports marketing world, to be at the table. Otherwise, we’re going to keep coming up with the same ideas using the same thought process.

Right now I’m leading a team. When I started I was a team member. Now I’m leading the team and drawing that line between being friends with people and being a boss and making sure people are getting things done. It’s a very hard line for me because I just want to be nice to everybody and I just want everybody to like me. But I’ve learned that being likable is not always as effective as being respected.

So I’m really working hard on not just giving my team the answer that’s going to make them like me, but giving them the answer that’s going to help them grow. I can’t conquer this world on my own. I need to create a whole bunch of teammates that can think and act on their own, and if they’re always coming to me because I’m not teaching them anything, then we’re never going to get there. I’m incredibly proud of the team we’re building and this is just the beginning!